Read The Old Man and the Sea on eBook or borrow from Swisher.  To login into our ebook and audio book collections, use your Bolles username and password. 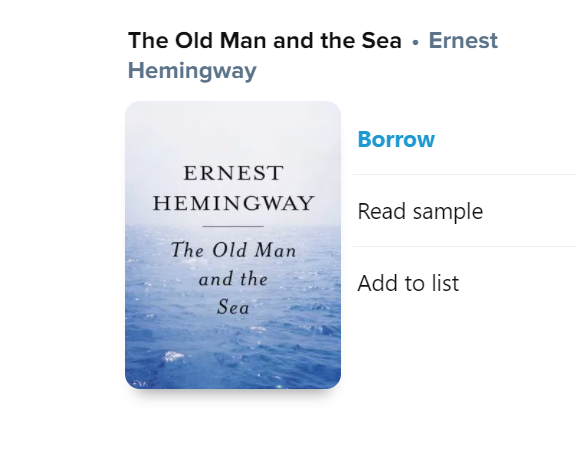 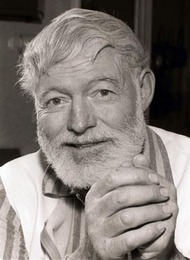 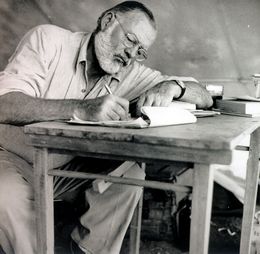 Ernest Miller Hemingway (1899-1961), American Nobel Prize-winning author, was one of the most celebrated and influential literary stylists of the twentieth century.

Ernest Miller Hemingway was born in Oak Park, Illinois, on July 21, 1899. His father was a country physician, who taught his son hunting and fishing; his mother was a religiously puritanical woman, active in church affairs, who led her boy to play the cello and sing in the choir. Hemingway's early years were spent largely in combating the repressive feminine influence of his mother and nurturing the masculine influence of his father. He spent the summers with his family in the woods of northern Michigan, where he often accompanied his father on professional calls. The discovery of his father's apparent cowardice, later depicted in the short story "The Doctor and the Doctor's Wife," and his suicide several years later left the boy with an emotional scar.

Despite the intense pleasure Hemingway derived from outdoor life, and his popularity in high school--where he distinguished himself as a scholar and an athlete--he ran away from home twice. However, his first real chance for escape came in 1917, when the United States entered World War I. He volunteered for active service in the infantry but was rejected because of eye trouble.

After spending several months as a reporter for the Kansas City Star, Hemingway enlisted in the Red Cross medical service, driving an ambulance on the Italian front. He was badly wounded in the knee at Fossalta di Piave; yet, still under heavy mortar fire, he carried a wounded man on his back a considerable distance to the aid station. After having more than 200 shell fragments removed from his legs and body, Hemingway next enlisted in the Italian infantry, served on the Austrian front until the armistice, and was decorated for bravery by the Italian government.

Shortly after the war, Hemingway worked as a foreign correspondent in the Near East for the Toronto Star. When he returned to Michigan, he had already decided to commit himself to fiction writing. His excellent journalism and the publication in magazines of several experimental short stories had impressed the well-known author Sherwood Anderson, who, when Hemingway decided to return to Europe, gave him letters of introduction to expatriates Gertrude Stein and Ezra Pound. Hemingway and his bride, Hadley Richardson, journeyed to Paris, where he served his literary apprenticeship under these two prominent authors. Despite the abject poverty in which he and his wife lived, these were the happiest years of Hemingway's life, as well as the most artistically fruitful.

In 1923 Hemingway published his first book, Three Stories and Ten Poems. The poems were insignificant, but the stories gave strong indication of his emerging genius. "Out of Season" contained the psychological tension and moral ambivalence characteristic of his mature work. With In Our Time (1925) Hemingway's years of apprenticeship ended. In this collection of stories, he drew on his experiences while summering in Michigan to depict the initiation into the world of pain and violence of young Nick Adams, a prototype for later Hemingway heroes. The atrocities he had witnessed as a journalist in the Near East became the brief vignettes about intense suffering that formed inter-chapters for the collection. One story, "Indian Camp," which sets the tone for the entire volume, has Nick accompanying his father, Dr. Adams, on a call during which the physician performs a caesarean operation with no anesthetic. They discover afterward that the squaw's husband, unable to bear his wife's screams, has killed himself by nearly severing his head with a razor. The story is written in Hemingway's characteristically terse, economic prose. "The End of Something" and "The Three Day Blow" deal with Nick's disturbed reaction to the end of a love affair. "The Big Two-Hearted River" describes a young man just returned from war and his desperate attempt to prevent mental breakdown.

Hemingway returned to the United States in 1926 with the manuscripts of two novels and several short stories. The Torrents of Spring (1926), a parody of Sherwood Anderson, was written very quickly, largely for the purpose of breaking his contract with Boni and Liveright, who was also Anderson's publisher. That May, Scribner's issued Hemingway's second novel, The Sun Also Rises. This novel, the major statement of the "lost generation," describes a group of expatriate Americans and Englishmen, all of whom have suffered physically and emotionally during the war; their aimless existence vividly expresses the spiritual bankruptcy and moral atrophy of an entire generation. Hemingway's second volume of short stories, Men without Women (1927), contains "The Killers," about a man who refuses to run from gangsters determined to kill him; "The Light of the World," dealing with Nick Adams's premature introduction to the sickening world of prostitution and homosexuality; and "The Undefeated," concerning an aging bullfighter whose courage and dedication constitute a moral victory in the face of physical defeat and death.

In December of 1929, A Farewell to Arms was published. This novel tells the story of a tragically terminated love affair between an American soldier and an English nurse, starkly silhouetted against the bleakness of war and a collapsing world order. It contains a philosophical expression of the Hemingway code of stoical endurance in a violent age: "The world breaks everyone," reflects the protagonist, "and afterward many are strong in the broken places. But those that it will not break it kills. It kills the very good and the very gentle and the very brave impartially. If you are none of those you can be sure that it will kill you too, but there will be no special hurry."

Hemingway revealed his passionate interest in bullfighting in Death in the Afternoon (1932), a humorous and inventive nonfiction study. In 1933 Scribner's published his final collection of short stories, Winner Take Nothing. This volume, containing his most bitter and disillusioned writing, deals almost exclusively with emotional breakdown, impotence, and homosexuality.

Hemingway's African safari in 1934 provided the material for another nonfiction work, The Green Hills of Africa (1935), as well as two of his finest short stories, "The Short Happy Life of Francis Macomber" and "The Snows of Kilimanjaro." Both stories concern attainment of self-realization and moral integrity through contact with fear and death.

Hemingway wrote To Have and Have Not (1937) in response to the 1930s depression. The novel, inadequately conceived and poorly executed, deals with a Florida smuggler whose illegal activities and frequent brutalities mask his sense of ethics and strength of character. Mortally wounded by the gangsters with whom he has been dealing, the individualistic hero comes to the startling realization that "One man alone ain't got no--chance."

The chief political catalyst in Hemingway's life was the Spanish Civil War. In 1936 he had returned to Spain as a newspaper reporter and participated in raising funds for the Spanish Republic until the war's end in 1939. In 1937 he collaborated on the documentary film The Spanish Earth. Hemingway's only writing during this period was a play, The Fifth Column (1936; produced in New York in 1940), a sincere but dramatically ineffective attempt to portray the conditions prevailing during the siege of Madrid.

Seventeen months after that war ended, Hemingway completed For Whom the Bell Tolls (1940). His most ambitious novel, it describes an American professor's involvement with a loyalist guerrilla band and his brief, idyllic love affair with a Spanish girl. A vivid, intelligently conceived narrative, it is written in less lyrical and more dramatic prose than his earlier work. Hemingway deliberately avoided having the book used as propaganda, despite its strained attempt at an affirmative resolution, by carefully balancing fascist atrocities with a heartless massacre by a peasant mob.

Following the critical and popular success of For Whom the Bell Tolls, Hemingway lapsed into a literary silence that lasted a full decade and was largely the result of his strenuous, frequently reckless, activities during World War II. In 1942 as a Collier's correspondent with the 3d Army, he witnessed some of the bloodiest battles in Europe. Although he served in no official capacity, he commanded a personal battalion of more than 200 troops and was granted the respect and privileges normally accorded a general. At this time, he received the affectionate appellation of "Papa" from his admirers, both military and literary.

In 1944 while in London, Hemingway met and married Mary Welsh, a Time reporter. His three previous marriages--to Hadley Richardson, mother of one son; to Pauline Pfeiffer, mother of his second and third sons; and to Martha Gellhorn--had all ended in divorce. Following the war, Hemingway and his wife purchased a home, Finca Vigía, near Havana, Cuba. Hemingway's only literary work was some anecdotal articles for Esquire; the remainder of his time was spent fishing, hunting, battling critics, and providing copy for gossip columnists. In 1950 he ended his literary silence with Across the River and into the Trees, a narrative, flawed by maudlin self-pity, about a retired army colonel dying of a heart condition in Venice and his dreamy love affair with a pubescent girl.

Hemingway's remarkable gift for recovery once again asserted itself in 1952 with the appearance of a novella about an extraordinary battle between a tired old Cuban fisherman and a giant marlin. The Old Man and the Sea, immediately hailed a masterpiece, was awarded the Pulitzer Prize in 1953. Although lacking the emotional tensions of his longer works, this novella possessed a generosity of spirit and reverence for life that made it an appropriate conclusion for Hemingway's career. In 1954 Hemingway won the Nobel Prize for literature.

Hemingway's rapidly deteriorating physical condition and an increasingly severe psychological disturbance drastically curtailed his literary capabilities in the last years of his life. A nostalgic journey to Africa planned by the author and his wife in 1954 ended in a plane crash over the Belgian Congo. Hemingway suffered severe burns and internal injuries from which he never fully recovered. Additional strain occurred when the revolutionary Cuban government of Fidel Castro forced the Hemingways to leave Finca Vigía. After only a few months in their new home in Ketchum, Idaho, Hemingway was admitted to the Mayo Clinic to be treated for hypertension and emotional depression and was later treated by electroshock therapy. Scornful of an illness that humiliated him physically and impaired his writing, he killed himself with a shotgun on July 2, 1961.

Shortly after Hemingway's death, literary critic Malcolm Cowley and scholar Carlos Baker were entrusted with the task of going through the writer's remaining manuscripts to decide what material might be publishable. The first posthumous work, A Moveable Feast (1964), is an elegiac reminiscence of Hemingway's early years in Paris, containing some fine writing as well as brilliant vignettes of his famous contemporaries. A year later, the Atlantic Monthly published a few insignificant short stories and two long, rambling poems. In 1967 William White edited a collection of Hemingway's best journalism under the title By-Line Ernest Hemingway. True at First Light: A Fictional Memoir (1999) provides an account of the author's life in Kenya in the early 1950s. Based on an incomplete manuscript by Hemingway, the work was edited by his son Patrick. A.E. Hotchner, a friend of Hemingway, gave previously unpublished material to the Library of Congress in 1999 that included a typewritten copy of The Dangerous Summer, a book published nearly 25 years after Hemingway's death. It was the first large collection of Hemingway's work to be given to the library.